I Lie For Money 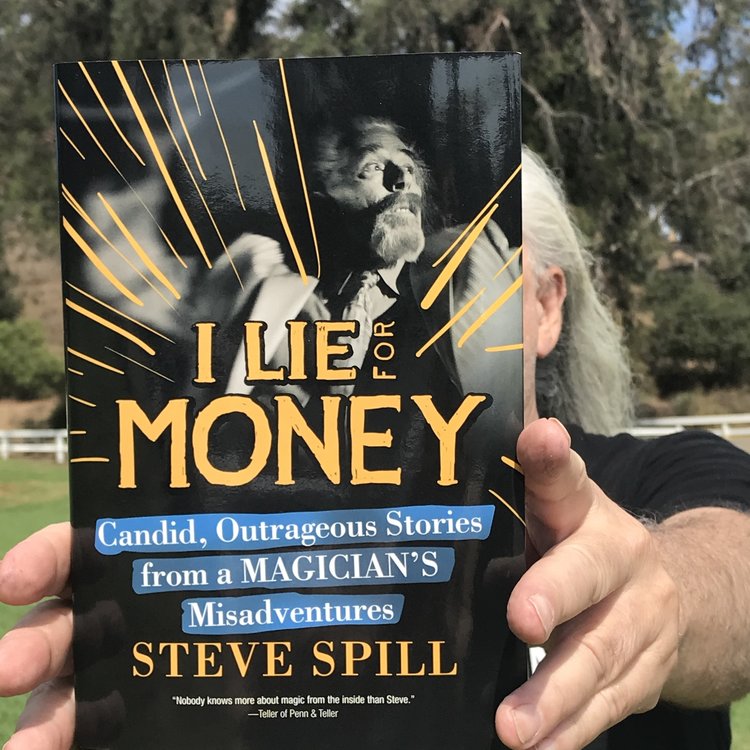 Spill tells of how his tailor grandfather sewed secret pockets in a magician’s tuxedo back in 1910, which started his childhood dream to become a magician.

This dream took Spill on a journey that started with him performing, as a young boy, at a “Beauty on a Budget” neighborhood house party to engagements in Europe, Africa, and the Caribbean, to today in Santa Monica, California, where he’s been starring in his own shows since 1998 at Magicopolis, the theater he designed and built himself.

Being a magician has given Spill the opportunity to interact with the world’s most famous and fascinating people. In his memoir, Spill reveals the many unique encounters that his profession has led him to enjoy and endure: hosting Sting as his opening act one night, spending two days on camera with Joan Rivers, and selling tricks to Bob Dylan, as well as encounters with Adam Sandler, Stephen King, and other celebrities.

I Lie for Moneyis a literary magic show that captures the highs and lows of an extraordinary life that will delight and amaze you with wit and wickedness. This book should be an obligatory read for anyone considering a creative career, and it serves as an inspiration to those who desire to craft an independent life.

“This offbeat behind-the-scenes look at a magician’s life is as unpredictable, fresh, and distinctive, as witnessing one of Steve Spill’s shows in person.”

“Steve Spill has been a pal of Penn’s and mine since the 1970’s. While we were still working for tips and eating dirt at fairs, Steve was running one of the classiest comedy magic clubs in the country, and still does (his current one is in Santa Monica). Nobody knows more about magic from the inside than Steve. And most important, Steve and I share the deepest bond of all: we both swallow needles.”

“With his combination of writing and performing skills and his endless inventiveness, Steve Spill is a major asset to the world of magic.”

“Steve Spill is one of my favorite storytellers. The man has pioneered more venues for magic than anyone I know, and along the way, broken lots of new ground as a comic, magician, bartender, busker, club owner, and now raconteur—and that’s no lie!”

“Steve Spill is one of the greatest magicians that’s ever lived. Fact. I Lie for Money is the most entertaining book about magic ever. Double fact. If you don’t buy this book, there will be a big hole in your life that you will never fill, a void that will haunt the rest of your days until you cry out in the night, ‘WHY DIDN’T I GET THE MEMOIR THAT CONTAINED ALL THOSE AMAZING STORIES ABOUT MAGIC?!’ Triple fact. The choice is clear.”

“A unique eye-opening account of the backstage life of a fiendishly funny magician.”

“A fantastic read packed with hilarious anecdotes and juicy tales of outlandish antics. Who would have thought the life of a family entertainer could be so wild?”

“Instantly hypnotic! Before finishing page one I was drawn in and happily trapped in Steve’s wild, surreal world.”

“I Lie for Money opens a secret door and lets the reader enter the almost unknown—and often misunderstood—world of the professional magician.”

“An honest look at the hard work that accompanies doing what you love.”

“Every person on the face of the earth who wants to laugh out loud and be amazed should read I Lie for Money.”

“As you turn the pages of the book you will travel along the amazing timeline that Steve has walked like a tightrope, stretched between his prodigious skills as a magician and his flamboyantly eccentric gifts as a showman.”

“A ridiculously entertaining book about [Spill’s] life and adventures as a journeyman magician trying to make a living from his art.”